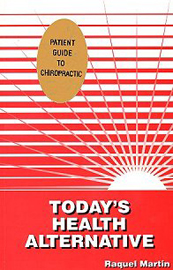 Following a stroke shortly after the birth of my brother, my mother sought medical help. Before the stroke her hobbies included sports such as skiing and tennis. For months following the trauma of the birth, she was partially paralyzed. A series of "modern" medical treatments was unsuccessful in relieving her neuromuscular pain, but finally she learned about the benefits of chiropractic care.

This book tells the moving story of her successful search for a life without pain. The book is about the past, present, and future of the world's largest natural health care profession in the U.S. It explains how correcting nerve interference relieved her of 12 years of back pain, chronic bronchitis, and insomnia. As a result she also avoided a hysterectomy.

She says, "I wrote this book because I believe from my own experience and research that a chiropractic adjustment, done properly, is so much more significant than patients realize, and also much more profound than even many chiropractors think. A precise adjustment has such a positive effect on enhancing the communication between the central nervous system and every cell in the body. With the many different techniques in chiropractic, there is a need to understand and respect the differences in the various methods used. It was the effect of these differences that influenced me to continue under chiropractic care." When my mother's good health returned she was inspired to share her story.

Today's Health Alternative is now being expanded to include recent developments.

Today's Health Alternative is the best book written about chiropractic for the lay person that I have ever read. Raquel Martin writes about chiropractic with the energy and enthusiasm that only a satisfied patient can bring to the work. She movingly recounts her personal recovery of health through chiropractic. Ms. Martin concludes by expressing her regret that she sacrificed years of well-being because of her prejudice against a health care system she knew nothing about. She writes, "If this book saves one person from that feeling of regret, it will have served its purpose."

If the chiropractic profession had commissioned an accomplished author to write a book about chiropractic, they would not have come closer to having as perfectly suitable a book as Today's Health Alternative.

Chiropractic - literally to "effect by hand" - is one of a family of gentler medical arts vilified by monopolistic medicine and the pharmaceutical industry. Since its invention over a century ago by the therapeutic genius D.D. Palmer, it has proven its worth. About the history of this skill, its triumphant struggle to defend its place in the sun, its increasing recognition - even by its adversaries - as an efficient, and affordable, treatment modality, and particularly about its stunning record in bringing back thousands upon thousands of sufferers back to health, none has, or could have, written a more gripping book than one of its prime beneficiaries, Raquel Martin.

Author of The Persecution and Trial of Gaston Naessens:

The True Story of the Effort to Suppress an Alternative Treatment for Cancer, AIDS,

and Other Immunologically Based Diseases

It is a privilege to be a part of Raquel Martin's ambitious undertaking. I am not aware of any other book that presents so well the subject of chiropractic from the point of view of the patient and yet gives such a comprehensive overview. The author has done an outstanding job of amassing and presenting the results of her investigation.

It is most appropriate that this book be written by someone other than a doctor of chiropractic. This field, as it grows ever more sophisticated, is so much more than any one doctor or one point of view. It is an aggregate of many different techniques, all of which are grounded in both research and clinical experience. To understand how Today's Health Alternative reflects this diversity, it is only necessary to read the author's acknowledgments and the long list of doctors who have helped to make this book a reality.

The timing of this work is perfect because of the heightened public awareness of chiropractic. There is a definite need for a book of this kind, written from a lay person's perspective. The author has made an excellent attempt to examine the chiropractic field from a scientific foundation, verifying facts and then requesting critical analysis, and correction, from specialists within the field. [She] has tried to meet the layman's needs - not at a superficial, anecdotal level, but at a factual level.

Raquel Martin's book, Today's Health Alternative, is an extremely well-written and informative introduction to the world of natural healing--but it is much more. [It is a] courageous work, a magnificent testimony to what it means to seek the higher way. Here is a noble soul, torn by twelve years of relentless pain and sorrow, refusing to "live with it." It is a testimony to what it means to rise above our prejudices and narrow opinions, and to strive to find a better way.

This wondrous book is certainly unusual in the field of medicine, for it is so much more than a mere repository of medical information. [It] traces the growth of an individual from darkness to light. ... Raquel Martin makes a decision ... against acquiescence, against the darkness, against a life of pain. She refuses to sit back and solemnly accept the pain that was destroying her life. Instead, she has valiantly launched a one-woman campaign against ignorance against despair, and out of these efforts she has given birth to a most useful and readable book.

... Mrs. Martin's book is an aesthetic triumph. From beginning to end one feels her love for the reader, her desire to communicate from the heart her experience and knowledge. I would urge you to give this book your most careful consideration, for here is a living testimony to the meaning of those immortal words, "The truth shall set you free."